Pacaya is an active volcano within easy reach of Antigua and Guatemala City. It is known as the easier volcano hike in the Antigua area and is a great afternoon or morning trip. I clocked it at 5km with 350m of elevation gain, and it took us around 2 hours including posing for photos and a fair amount of goofing around. 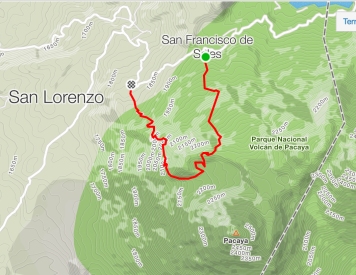 It is possible to go to the summit, but most tours take you to a ‘mini summit’ with 360 views of the surrounding area and of the Pacaya summit/cone, and into the lava fields and back down. We booked through our hotel and so were driven to the national park and then given a tour guide to escort us to the lava fields. Quite hilariously, a group of porters on horses follow groups up, in case you decide you’d rather not anymore, and want to be carried up.

The terrain turns extra-terrestrial as you descend into the lava fields. The guide brought out of a bag of marshmallows, found a small hole in the ground and put a marshmallow a few cm down. Out it came, lovely and toasted – cool! 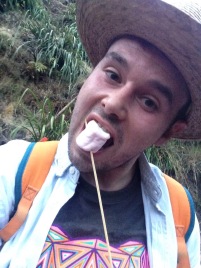 The sun set as we descended and we had a pretty awesome view from above the clouds.

One thought on “Pacaya Hike, Guatemala”