The morning started surprisingly cold – the temperature had steadily dropped as we drove from Venice, 40 miles north to Castaic Lake Recreational ground. OCR ‘celebrities’ probably old hat sitings at US events were a nice surprise for me, Hunter McIntyre (although not racing) was there, and it was great to meet Scott Keneally of Rise of the Sufferfests.

A live rendition of the US national anthem had just preceded the men’s elite wave, and then at 7.45am I was lining up with 100+ other Spartan women, the sun had just risen and started to clear some of the fog that was sitting on the lake.

A quick start uphill saw the large pack quickly start to separate, as some very speedy girls moved briskly out of sight. I had soon forgotten the ‘cold’, as 5 minutes into the race, the sun was getting stronger and I was feeling pretty warm. For the first few miles, bar a few over/under walls, the only obstacle was the terrain. The climbs seemed never ending – whenever it looked to be levelling out, we turned a corner and went up another slope. As per usual though, the tougher the climb, the better the view, after around 3km and 200m elevation gain – I turned around at the top and told the girls around me to do the same… we had an incredible view of the lake and the rolling hills surrounding it, the sun still working on burning through the fog that lay across the lake below.

A fun downhill took us to the first carry – a sandbag carry, and I was pleased to make up some ground that I’d lost on the hills.

Next came the rig – determined to not make the same mistake as Mexico, I took a moment to compose myself before making my attempt, confidently navigating the pole and onto the first hanging rope, then reaching for a hanging base ball…. slipping off. Oh well, miracles aren’t going to happen overnight. I headed to the burpee area, which was already littered with people.

A trio of grip strength obstacles were up next. Firstly the z-wall. Dammit, more burpees, I really need to work on that. Then the Hercules hoist – no dramas with this one fortunately. A water station gave me a short break before tacking the third in this obstacle heavy section – monkey bars. Please, no more burpees. I took a grip of the first bar and fortunately felt pretty confident – it was dry and the scaffolding was a good diameter. At a third of the way in, I needed to swing and gain momentum to reach a bar higher. With words of encouragement from the marshals, I swung and reached out, grabbing the bar and continuing onwards – giving the bell a good smash at the other side.

The miles clocked up and soon I was making my way down the dusty slopes nearing the event village, the sound of the music and later waves getting louder. A nice short bucket brigade and quite a low rope climb gave me the opportunity to make up a bit more ground.

Then the spear throw. I’d been thinking about it since slipping off the z-wall, determined to gain back those 30 wasted burpees. I untangled the rope and threw an absolute textbook throw – perfect curvature and perfectly straight…. Unfortunately I also have a textbook burpee excuse – I’d thrown the spear from the wrong standing position meaning  the rope wasn’t long enough. Burpees!

I gave the burpees my all, as I thought that was my last opportunity for burpees, I was wrong, we had another burpee obstacle to come.. Around the corner came ‘Olympus’, an obstacle seen at the Spartan World Championships a few months earlier. Whether it was the position at the end of the race, or something else, this was harder than I expected and it took all my strength to hold on to the last few holds, flinging myself hopefully at the bell at the end, with the thought of 30 more burpees allowing me to dig deeper. Bell smashed and only one last loop between me and the finish line.

A long barbed wire crawl and a short ankle splash in the lake and I could see for sure now that only the obstacles left were the atlas ball stones (+5 burpees), slip wall and fire jump. I’d never raced in such a close and competitive field before (excluding the OCR World Championships, but that wasn’t close!), and there were about 3 girls currently on the stones. Beast mode engaged – I knew I could make up some ground – charged through the atlas stones, burpees and up to the slip wall where I managed to overtake someone else. It was quite a buzz as I crossed the finish line on a sprint with about 5 people close behind me. It also gave birth to a meme that I found amusing (laughing at my own jokes), fortunately some others on Instagram did too.

I loved the race and it was awesome to race in such a competitive field. Although I ‘only’ came 41st of 108, I didn’t have much more to give and I’m happy with that! The terrain was incredible and for a short race, it was a toughy.

Thanks so much to my family Tim and Dawn for driving me and also providing such awesome photos! 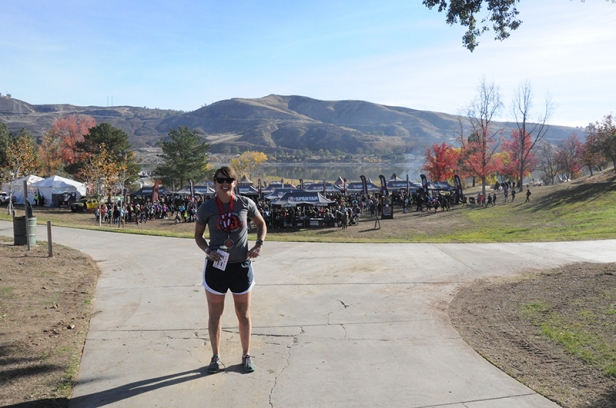