So I’d quietly kept the weekend of June 12/13th free. Penciled in the diary in my mind. The inaugural European Championships in Berendonck, the Netherlands. The only qualifying race I was signed up for was 4 laps of Winter Nuts – my goal was purely to finish (terrified of my first DNF) and so I didn’t want to let anything else distract me from that goal. But I finished, I qualified, and so I booked my flights to Amsterdam. 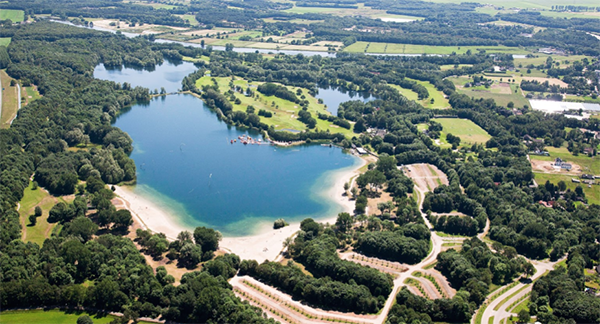 It wasn’t that I was particularly keen on having a band back on my wrist (having broken myself at the 2015 World Championships, and frustrating lost my band at the UK Championships in the rain and cold), but the location just looked stunning. Beautiful woodland, a crystal blue lake, sandy beaches – what an incredible place for a race! And woop, no hyperthermia (I had just finished Winter Nuts after all!).

The fantastic location was why I wanted to run this race, and it didn’t disappoint – most of Team UK were at the Strong Viking site (the championships were sharing the majority of the course with the Strong Viking race) on the Saturday – scoping out the course and trying to see as much of the obstacles as possible. Excitement was in the air as we discussed technique and wandered around the event village. It didn’t disappoint – from the looming slide, to the finishing rig, to the beautiful lake stretching across the venue, it had to be one of the most impressive race settings I’d ever seen.

Race day rolled around and the excitement built. We were to be set off in waves, which did settle the nerves slightly – we could watch the elite men scale the wall that started you off on your race. The wall was much discussed – 8 feet tall, wide, and covered with a slippy tarpaulin, meaning there was only one way over – muscle! The first to struggle was a woman in the wave before mine, she tried a few times and then looked around helplessly – a sign of things to come – this course would take no prisoners!

A few minutes later and I was ushered into the starting pen, the same wave as the UK female number one, Freya Martin. A short countdown and we were off. There was a bit of a scramble as we heel-hooked our way over the starting wall, and a clatter of feet as we raced across the metal bridge, leading us through to the woodland. A rope climb later and we were into the first section of the race, which I would describe as the MUD section! A far cry from the sandy beaches and dry trails I was expecting, my Terraclaws slipped around in the deep mud, and as I crawled through the ditches, under beams, over a slippy inclined wall, and through ‘Nuts Challenge’ type muddy ditches, I felt my energy zapping away. Conscious that there was still a long way to go, I settled into a steady pace, cautiously navigated over a balance beam and eventually came out of the trees and faced the lake.

A short run across the beach and up and over the quarter-pipe (Nordicly named ‘Storm the Castle’) I went. Next up was the ‘UFO’ – what looked like a simple enough rope climb with a wooden disk three quarters of the way up. But sodden with mud from the previous section, and the fact that the rope was suspended quite high up from the ground, getting a foot lock proved tricky. The UFO would end up claiming quite a few bands. This is where the spirit of Team UK really started to shine through for me, especially amongst the girls – given that the obstacles relied heavily on upper body strength, and sometimes (unfairly, in my opinion) on height, we all certainly had a challenge ahead (some more than others – the height obstacles were less of an issue for me at 5’8, but some of the girls were shorter than the height that the organisers had dubbed would be ‘fine for you to complete all obstacles’) . But we were all stronger together, cheering each other on and lending support. The UFO re-try lane was pretty busy, but fortunately once I had a proper foot lock, I managed to climb up and reach the top – slapping the beam with enthusiasm (and relief!).

Next up was the ‘Flying Ragnor’ – a jump to a suspended bar, which would swing and let you ring the bell (similar to Tough Mudder’s King of the Swingers – an obstacle I was less than fond of due to a slight fear of heights, jumping from heights, water, the list goes on). All I wanted was to ring that bell, and do it the first time. I’d watched from a distance on the previous day and it didn’t look too bad – “I should be fine”, I thought. Things were different when you reached the platform and realized just how far you had to jump to reach the bar. I was there for a few minutes – conscious of the ticking clock, but nervous for the jump – what seemed like a leap of faith that you would even reach the bar. I think everyone else I was on the platform with was having the same hesitancy… they’d approach the edge of the platform fine, but then freeze. Time to get myself into gear, I’m not going to lose my band through fear of jumping! To refresh my head, I moved to a different platform, made a short run up, and leaped. I grabbed the bar, swung and triumphantly kicked the bell with my foot. Thank god for that. Elated, I started to enjoy the race. Maybe daring to dream I could keep this wristband?

An ice dip and some running later and we were faced with one of the distinctively Dutch ‘Survival Running’ obstacles (http://survivalrunning.weebly.com) – monkey bars, to ropes, to monkey bars. I managed to get across with relative ease – a photographer rushing over when he realised I was going to make it.

Next up a sandbag/wreckbag carry. Yay! Something that requires no technical ability, my specialism! Merrily on my way I went, until I was instructed to put the bag down – it was time for that slide. In hindsight it was a good thing that it caught me by surprise – I had no time to over-think and chicken-out. I made my way up the steps –I had no choice – I still had my band, there was no way I was losing it for just being a scaredy cat! The marshals were fantastic, I sat down, they instructed me to lead back, chin down, arms crossed, and gave me a gentle push. It’s just what I needed and down I went –instinctively putting my arms out to slow me down – completely futile of course! After what felt like a whole load of air-time, I crashed down and was flooded with adrenaline, but mainly relief… I’d done it! I picked up the Wreckbag again and I was on top of the world!

Another ‘Survival Running’ obstacle was next, which unfortunately came with a hefty queue. Strength endurance was key here – as you were holding your own weight for such a long time as you traversed a beam, to a rope, to a cargo net, and finished with an ‘arms only’ rope traverse. It took me until my third go to complete it; again I dared to begin to dream that I could keep this wristband!

Onwards from then, we were released into the Dutch countryside and the beautiful sandy trails. The pack had spread out, the queues and congestion seemed to be behind me, and again I started to settle in. The further into the race I got, the fewer wristbands were around. Competitors from all different countries would notice I still had mine and cheer me on, say well done and wish me on my way. The support was fantastic. At a particularly tricky inclined wall, the support from the other UK girls was brilliant – all willing me to complete it and keep my band – I felt like we were in it together and I’m not sure I would have done some obstacles without that belief and support.

I watched my Garmin as the miles clocked up – could I actually do this? Could I actually finish with my band? One by one, obstacles that I’d been worried about were behind me – they weren’t as difficult as they had seemed in my head. Nine and a half miles done, and I could hear the event village music. A simple rope traverse across a lake was ahead but I could see people were struggling – getting half way or less and dropping lifelessly into the water, exhausted. I started across, hanging down and moving hand over hand – I suddenly felt so drained, and I had barely made it to the water! I dropped in – I needed a different approach. I tried on top, pulling myself across, ignoring the pain of the thin rope digging in down my body. I’d reach half way, and then the movement of the rope would cause me to lose my balance, and drop under, still hanging on with everything I had left. I hooked my arms over the rope and tried everything to keep moving forward, but the distance across the lake was just too far. I think I tried for 45 minutes before the course sweeper caught up with me – if he catches up with you, you lose your band anyway. He said to me (and he was holding an actual broom!), “you’ve got one more attempt, then I take your band”. I tried, but again, sheer exhaustion meant I made it about half way before lifelessly dropping into the water like those before me. My wristband was gone, and I was broken.

The rest of the course is just a blur of half-hearted, exhausted attempts, and some very grumpy tyre flipping. A Muddy Highlander hug at the finish line managed to bring a smile to my face, but I was gutted. 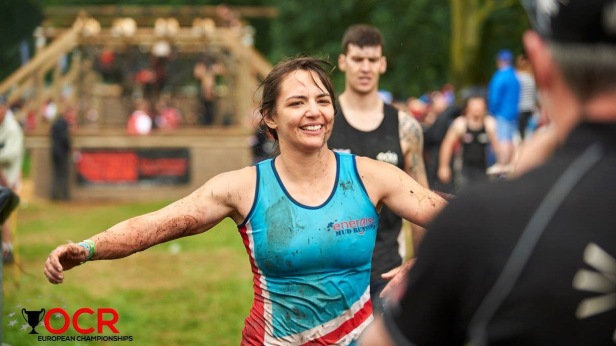 However, once again (like the World Championships) the performances of other Team UK competitors, as well as competitors from the different nations, lifted me up. The grit determination you witnessed if you stood and watched the final rig; people digging deep, simply unwilling to give up. Seeing the exuberance as people finished and crossed the line with their band was incredible. Soon across the line was Kerrie Fisher, band in-tact, and one of the only two UK women to finish with it.

The course had been brutal – some categories had just one finisher with a band, so just one podium place filled. Some podiums were empty – no finishers at all within many categories. However, the UK had been out in force and we did not disappoint – winners across categories and second place female to Freya Martin.

Overall, this was an incredible experience. The race was well-organised with fantastic with innovative obstacles – a new experience for many of Team UK as we were introduced to the Dutch ‘Survival Racing’ (lots of ropes!). Led by Mark Leinster, the UK contingent was everything you’d want in a team – supportive, inspirational, and just fun to be around. I think it’s safe to say, we’ll all be back.