A familiar scenario for runners I’m sure, particularly OCR-ers.

Coaxed into signing up over Christmas by Harry, I was joining Energise Mud Runners again. Hooray!

Since the cold of MSB in December, I invested in an innov8 merrino wool long-sleeved top, wrag and socks. And also some Black Fin gloves from Obstacle Kit. Combined with listening to Frozen’s ‘Let It Go’ several times on the drive down (“the cold never bothered me anyway”), I was feeling ready(ish) to tackle the winter conditions!

Race format
Describing themselves as a ‘natural wild run’, Ram Run (Saturday) is a 12km or 8km OCR based in Stoneleigh Park, Warwickshire. Hidden away In the slightly odd location of a business park, the run was easy to get to from the M1, with good signposting and free and easy parking! Thumbs up! Sounds like a small thing but logistical ease is always very welcome!

Their signature obstacle is the ‘Bridge of Despair’ (ominous..!)… a rope climb out of the River Avon onto a bridge, which you need to do twice.

If you wanted to be in competition for the trophies (1st, 2nd, 3rd), you had to email and declare yourself a ‘Trophy Hunter’ (a different coloured race bib) which meant you were eligible for time penalties if you did not complete obstacles. I missed this detail in the (probably longest ever) pre-race email, but fortunately the RR team were very accommodating and managed to change my number the day before the race, as well as enter me into the ‘Insanity Sprint’ – a 600m sprint race taking part after the main run. Not that I thought I was in with a chance for a trophy, but I certainly didn’t want to count myself out before i’d even started running…. and the term ‘Trophy Hunter’ is pretty cool.

The run
Predictable delays meant the run didn’t start on time. There were some grumbles about it but really, it’s sometimes to be expected and sucked up. The registration process is inevitably inefficient leading to queues – hopefully RR will get this sorted for next time though!

A bit of a half-arsed warm up (I’m not the biggest fan of organised warm ups so no complaints here) later and we were ready to go. Apparently the delays meant that the waves were only a few minutes apart, which was a problem, as queues and bottlenecks quickly formed throughout the course. We’d only ran 700m and we’d already hit 3 long queues. There was talk at one queue to go back and start over again! I don’t know why runs don’t just start every race with a long running section to get everyone warmed up and spread out the pack.

Heading back past a queue for the weird turnstile!

The course improved as it went on – a log carry around a track, large tree trunks to hurdle over, several crawls, walls, and balance beams, all within the first few kms. When we came to the ‘4×4 course’, the mud really came into play and became the main obstacle. This would be the 4km section that we looped around twice for the 12km route. 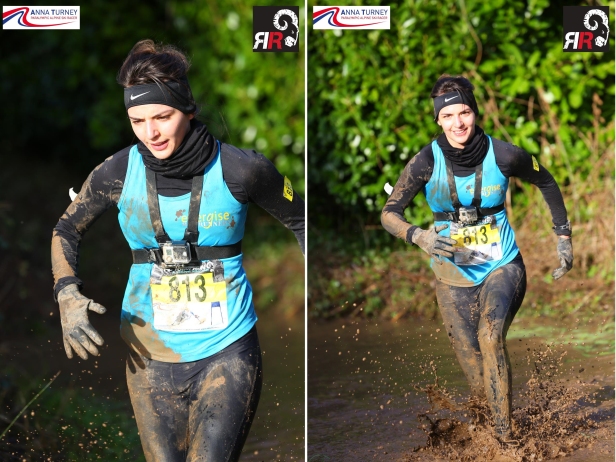 And so came the ‘Bridge of Despair’. With a rope in my gym, which I love to climb, I’ve become fairly confident(ish) on a rope, so I went for the straight rope which didn’t carry any time penalty. There were three options, this one, the knotted rope (60 second time penalty), and the cargo net (2 minute time penalty). This was no ordinary rope climb though! Once you made it to the top of the rope, you had to haul yourself up onto the beams of the bridge. This is all after being stood for a little while in the cold River Avon (I had to wait to get onto the rope), which saps your energy and strength every second you’re stood in the January waters! With a ‘helpful push’ from the gentleman behind (although it was less than helpful that he started climbing the rope before I was off it!), I was up. Lap 2 was a slightly different story. Again having to wait a little while in the river, my arms were completely sapped of energy in the cold. I gave the rope 2 attempts, each time failing to pull myself up onto the bridge. See photos below…. the photo to the right is me looking knowingly at the watching spectators… “nope.. this isn’t happening!!”. And so to the cargo net, and my arms had well and truly packed up and gone home. With some encouragement from another runner, and the crew on top, I finally made it onto the bridge, pretty much sorely using my legs to push myself up. The 2 minute time penalty was quite welcome in the end as we were treated to free teas and coffees! Very civilised!

Struggling on the Bridge of Despair on lap 2!

Tea party on the Bridge of Despair

And onto the home straight… so I thought. The swimming (or lack of) was fine, and the River Avon was definitely warmer than the water at MSB. And there was no jumping off the Bridge of Despair, as I thought might be possible. Then we were faced with the ‘Watery Grave’ – a cage crawl/float on your back through a trench in the ground. Now this was seriously cold. Serious brain freeze here! For some reason I came out smiling though! Must be relief… 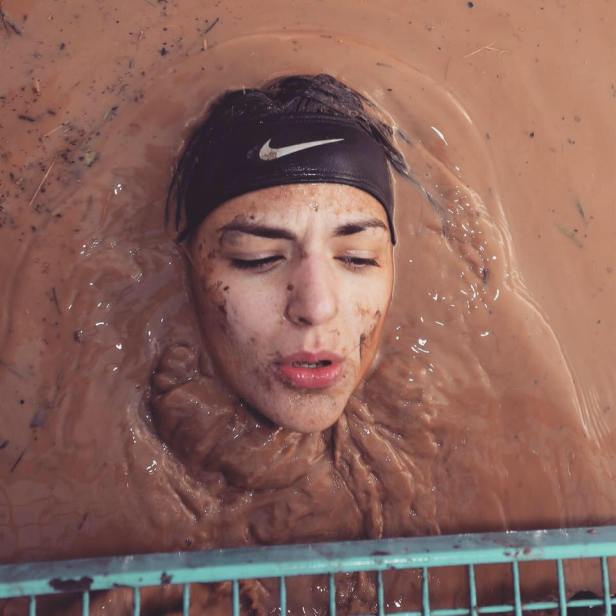 Some spectators commented at this point that the runners kept going the wrong way… well it’s because we have BRAIN FREEZE! This is one other point… throughout the course some of the marshalls were excellent (eg the Bridge), however at other points, where it wasn’t clear which direction we had to go, they could have made a bit more of an effort to direct us. I was close to a few wrong turns and I’ve heard a few people went slightly off-piste!

A cluster of obstacles completed the course. Freezing and a bit shell-shocked from the Watery Grave brain breeze, I put on a less than impressive display over some hurdles, some large covered hay bales, cargo net and inclined monkey bars (where I used the old ‘koala bear’ technique).

The end of the course left a little to be desired… the only real indicator that you’d finished was being handed some soup (which was ACE though) – there was no finish banner or anything like that. Medals were missing apparently and you had to pick up your own goody back from a box in the corner (which wasn’t clear at all – easily could have been missed unless you were on the hunt!). Fortunately, Ram Run avoided a riot (“we’re here in JANUARY – we want our medal!”), the medals were found.

Just under 2 hours, which I was a bit disappointed with, but the queues didn’t help. 7th place female, decent enough! First race of the year… done!! 🙂  Massive props to Gemma Bloomfield.. who not only won the 12km on the Saturday, but the 24km on the Sunday. Inspirational!! 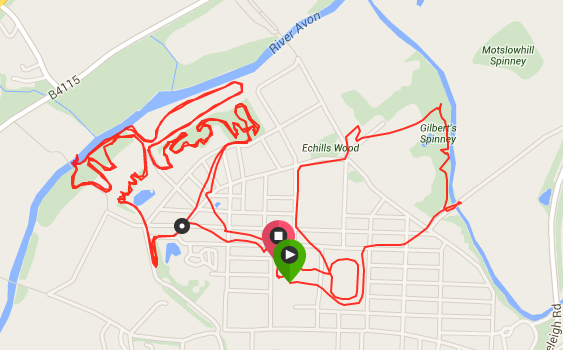 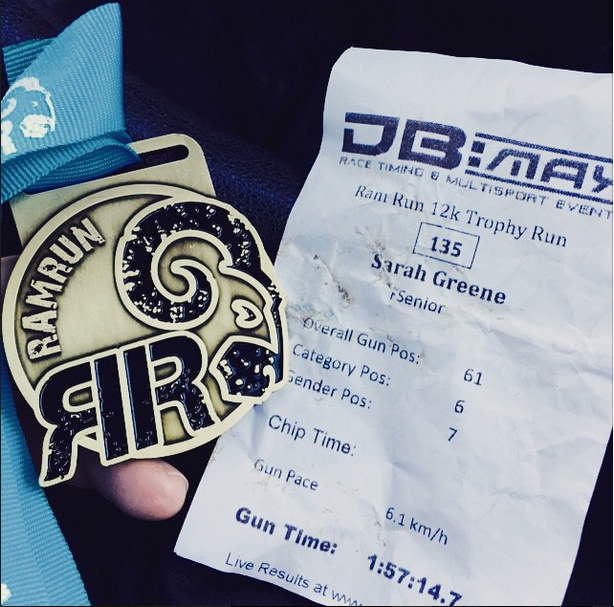 Would I run it again?
Definitely. Despite its flaws, the £35 price point makes it great value. With the customer service pre-event spot on, and the ease of getting there, parking, etc. I’m already signed up for the Spring Ram Run on April 18th with Team Victorious Secret!

And here’s my vid…